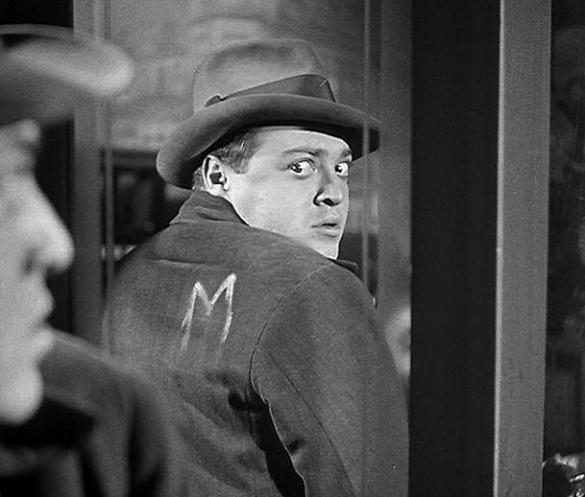 The following is another essay I wrote for my global cinema course. The essay is an analysis of the use of sound in the film M from 1931 by director Fritz Lang. M is a film about the hunt for a child murderer (Peter Lorre) in post-WWI Germany. Lorre’s character is much like those he would play in several films over the years (creepy and grotesque). He is the perfect man to play a psychopathic child killer, and has that chilling sparkle in his eye to make it even more disturbing. I thoroughly enjoyed the movie as it was artfully filmed and effectively suspenseful. Take a look at my paper, “Listen to the Sound of M,” and if you have time, watch the film (I’ve included a link to the full movie). It is quite different from traditional murder movies (certainly nothing like the axe-wielding films of today), and many of the horrifying events are left to your imagination (sometimes that is much more vivid!)

Listen to the Sound of M

Released in 1931, the film M was Austrian director Fritz Lang’s first foray into sound cinema. Prior to this picture, Lang had achieved recognition outside of Europe for Metropolis, a silent film about a futuristic city which debuted in 1927. Lang had already made fourteen silent films by the time M was released, and its tendency to move back and forth from sound to silence is reflective of the uncertainty he had with the new medium. Unlike Jean Epstein who expressed disapproval of the addition of sound, Lang saw an opportunity to experiment and enhance his work with the technology. Though he was hesitant to embrace sound in its infancy, as evidenced by M’s 1931 release, Lang eventually understood that in order for his films to have greater resonance with his contemporaries, he needed to find a way to implement it. In M, Fritz Lang integrates sound in a variety of ways to manipulate the audience’s reaction to the film which feeds into its legacy as an example of vernacular modernism.

When the subject of sound is discussed in relation to cinema, the conversation is traditionally about the use of sound, and rarely is it about its omission. However, it is nearly impossible to describe sound in M without detailing its calculated, strategic, introduction and removal. The first major instance of Lang really bringing sound to a halt is around the twenty-minute mark. The minutes immediately preceding the scene include a phone conversation from a police officer being laid over footage of the police looking for the killer. Then suddenly the sound is cut off and the immediate affect is that the primary attention of the viewer shifts from the conversation to the footage. The silence continues for roughly two minutes until it resumes with a whistle. During the period of the two silent minutes, the footage that is shown has the feel of a documentary. This idea is supported by the “observant” camera angles and the relatively “common” events which unfold. In addition to the change in the focus of the audience’s attention, the silence also acts to slow the narrative down. Rather than bombarding the viewers with the sounds which would have accompanied the busyness of the shots, Lang chooses to simplify the images by presenting them from an observational perspective. As a result, the two minutes seem to last much longer. Lang employs this sound-removal technique several more times in the film, and these moments generally occur when such “documentary-like” shots are presented. 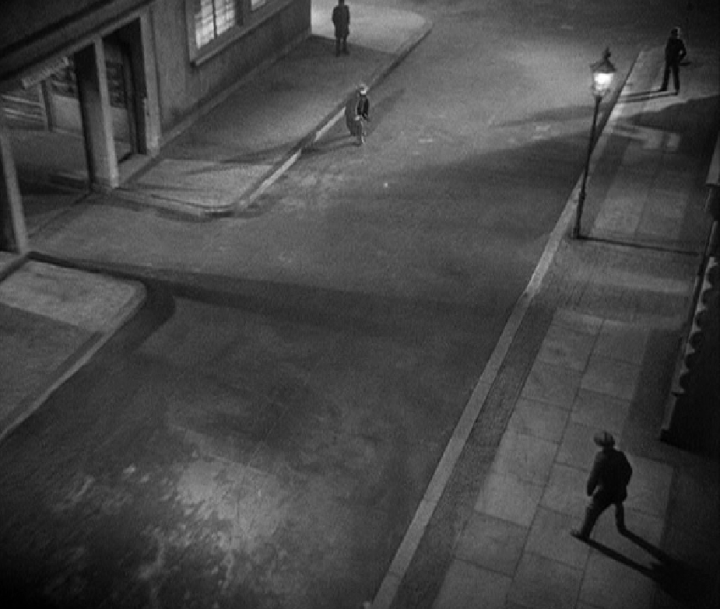 Sound also plays a crucial role in the mise-en-scène of M. Perhaps the most prevalent way in which this is true is the formation of various “sound bridges.” As the definition of mise-en-scène encompasses not only the visual but also the auditory elements of a film, Lang plays with the connections between the two aspects, effectively highlighting both simultaneously. The result is a combination montage of both sight and sound. One such sound bridge occurs around the forty-second minute. The group of criminals is together discussing whom they could get to work on the streets to help locate the killer, when one of the men declares “The beggars!” After his enlightened suggestion, the film shifts to a man (beggar) laying out cigarette and cigar butts. On this image is transposed the dialogue of the criminal who continues, “The organization of beggars.” What Lang is able to accomplish here is seamlessly move the narrative from the men discussing whom they want to employ to actually showing the men they have chosen. In a way, the bridge itself is indicative of an affirmation that this is the course they will pursue. A further, more pronounced example of sound as an element of mise-en-scène occurs in the very first scene in which can be heard the sound of a girl talking over a blank screen. In this case, the sound constitutes the entirety of the on-screen mise-en-scène, but it also helps to put into place a certain expectation of the off-screen elements.

In many regards, the most crucial determinant leading to the classification of M as an example of vernacular modernism is the use of sound itself. Miriam Hansen describes in, “Fallen Women, Rising Stars, New Horizons,” one element of vernacular modernism as “[the] quality of the films to provide… a sensory-reflexive horizon for the experience of modernization and modernity… as a cultural counterpart and response to technological, economic, and social modernity” (Hansen 10-11)… It should be noted that the use of this part of the definition to discuss M deals with the films placement in time. Today, as most films are integrated with synchronized dialogue, simply having sound would not be enough to be reflective of contemporary technological modernity. However, as the film is released when sound is still in somewhat of an introductory phase, it is appropriate to apply its implementation as “modern,” and therefore reflective of modernism, in the socio-technological landscape of the times. 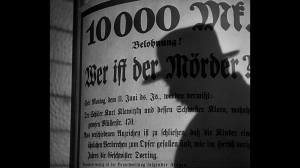 Dealing with the same element of vernacular modernism as “sensory-reflexive,” it is precisely Lang’s sound editing which draws the audience’s attention in as aforementioned. In addition, in contrast to the application of vernacular modernism as it relates to “classical” Hollywood, the narrative structure of M in some ways reflects the, then, “vernacular” development of plot. Because the audience is introduced to the killer very early on in the film, the question presented becomes less about the “who” and more about the “why.” This structure would become characteristic of several “film-noirs” of a slightly later time period. Overall, it is Lang’s embracement of modern technology and modernist storyline/narrative that lead to the description of M as a work of “vernacular modernism.”

To more narrowly work with M in a modernist lens, it must be presented within the context of German modernity. This societal modernity was largely a reaction to, and the antithesis of, Expressionism. One movement which characterized this progression emerged in Germany in the 1920s known as “The New Objectivity.” The movement itself was phasing out by the time M was released, but it embodies many of the qualities (Warner, 13 February 2013). Primarily, German modernity finds its way into M in the characters and plot of the film. In some ways, The New Objectivity was a precursor to Italian neo-realism in its objectivity and “documentary” aspects. These elements pervade M with its relatively simply characters. The modern landscape at the time was one of sorrow and suffering following the country’s defeat in WWI. The dim lighting feeds into this context and aids the film in obtaining an overall resemblance to “real-life” German culture of the 1930s. 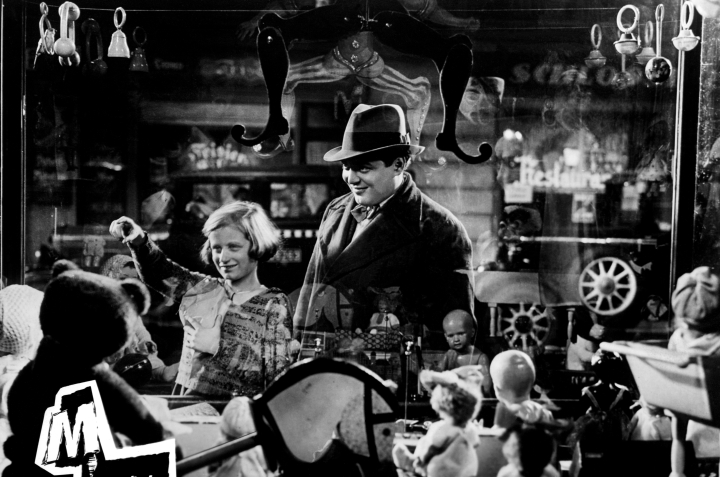 As evidenced by Fritz Lang’s M, vernacular modernism is not only an appropriate label for sound cinema, but it further enhances the concept. Hansen said that it is the modernist aesthetic which must be, “…understood as pertaining to the entire domain of human perception and sensation” (Hansen 11)… This would indicate an almost necessitated call for sound to evolve as a primary means through which film conveys these aspects. To take the concept a level further, in dealing with the films of today, the definition of vernacular modernism must be revamped. The new definition would need to be cognizant of the contemporary technology used for viewing enhancement (i.e. high-definition or 3D), as well as the how narrative has changed since the term’s inception. Though vernacular modernism was conceived under certain socio-cultural circumstances, it remains an enduring concept which can be applied to a variety of different cinematic modes and timeframes.

One thought on “M”