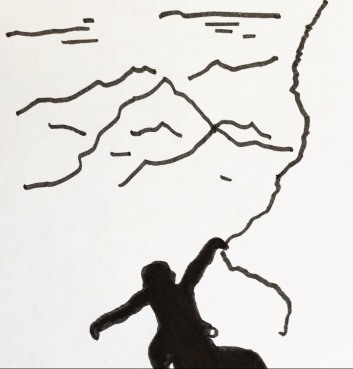 Monica secured her right hand on a lip of the granite face and moved her feet, gloved in thin climbing shoes wrapped generously with rubber soles, until they too reached satisfactory resting places. Feeling relatively comfortable, she released her left hand and twisted her body away to see the valley filled with its thick carpet of foliage below, where the meandering rocks and cliffs used the changing sunlight to throw shadow puppets. In the hour since the sun moved on from The Nose, her selected route on El Capitan, she hadn’t had a chance to appreciate the performance, and at that moment the sight relaxed her.

Monica concentrated on her pulse, bringing down the palpitations by controlling her breathing. Facing the rock in front of her, its age lines snaking unpredictably, subdued hues melding together from countless bouts with the environment, Monica closed her eyes and cleaned the busy slate of her mind. She tried to block out the sensation that her entire body was engulfed in flames, her muscles calling for respite, and she stopped listening to the screaming tendons in her fingers. It was the only way to keep going up.

Once she successfully tuned out the pain, Monica conjured up an image she had perfected through weeks of visualization. She imagined herself atop El Capitan, hands fixed on her hips, her chest rising and falling rhythmically as her lungs welcomed in and said pleasant goodbyes to breaths of accomplishment. From behind her sunglasses, falling just shy of the sweat-saturated bandana around her head, Monica opened her eyes with renewed confidence.

Monica reached into the nylon pouch of chalk powder clipped firmly to her belt-loop and coated each hand in succession. Her position was a familiar one, but one that she had failed to progress past on all previous tries. Earlier, with the kind of bull-headed confidence that often proved fatal, Monica decided, against the advice of her peers, to make a free solo attempt. She hoped the real and present possibility of death, more tangible than ever before, would propel her beyond her limitations.

El Capitan did not make the trip easy for the bold, carefully selecting only the worthy to conquer it. To Monica, the more the odds stacked against her, the greater the appeal. She was an adventurer through and through, and irrational decision-making was a key tenant of her life-model.

The outcrop hanging just a few feet beyond Monica’s grasp, previously stimulating tremendous angst within her, stirred up a drive. The feeling pleasantly surprised her, like reaching for a glass of gin and instead tasting the refreshment of glacial water. She moved her right foot into a small niche like a puzzle piece, and relocated her left to a scarcely noticeable notch. As she straightened her legs her body unfurled, making her look more like an inchworm than an agile climber.

To her side Monica noticed a patch of the dark lichen that littered the stone façade, and in that spot she saw an image of herself caught in a fatal free-fall, its realism unsettling. It was like an organic Rorschach test playing devilishly with her imagination. But it’s just moss, she told herself, nothing more. Shaking her head, she erased the image and extended upward for the quarter-sized hold just within reach. Her next move came naturally and unconsciously, moving her ever closer to her granite Achilles heel.

Her right foot progressed without trouble, but the shelf upon which she placed her left turned to a rubble, causing her leg to drop and forcing her to dig in to her three remaining anchor points. Monica let out a cry that pooled frustration and desperation as she found another place for her dangling leg. The cry was the first instance that reminded her she had no lifeline. Normally, she was able to calm herself by looking at the hex clamps, threaded by a rope attached snugly to her harness, which would catch her if she fell. But there were no hexes, no ropes, no harness, no safety. If she made a mistake like that again she would become the falling woman in the lichen.

Monica knew her greatest chance of survival stemmed from her ability to focus. So she dug into her reserve of concentration and eyed the ledge. She found solid footing a few inches higher and hugged her weight against The Nose. The lone way forward was to find a hold, latch on, and hang suspended almost 3,000 feet above the earth until she could grip with her other hand. Warning signals called out from every part of her body begging her not to continue, but she knew the sole option was up.

Monica bit her bottom lip and yelled, “Come on!” With the sum of her might she heaved her hand at the ledge and found a sill on which to clasp. Like a Christmas ornament placed precariously near the end of a branch she hung, her weight supported by a single limb. Quickly she flung her other hand to the same height, her fingers scraping and searching for something to grab, but it slipped.

Though in real-time only a fraction of a second, like Wile E. Coyote after the ground beneath him vanished, Monica hung motionless, completely unattached to anything but the air around her. She noticed her hands, mere centimeters from the ledge, though effectively miles away. As she fell she watched the ethereal clouds brushing the crystal blue sky above and the majestic face of the cliff, standing more kingly than ever before.

Connecting with the ground was not as painful as Monica had imagined, it felt almost like landing on a soft hotel bed.

“Ah Monica! You almost had it that time!” a man wearing a Cali Climbing Co. t-shirt said, extending his hand to help her off the padded blue mat. Monica looked at the tin ceiling, sighed, and grabbed the man’s hand as he pulled her up from her vivid fantasy.