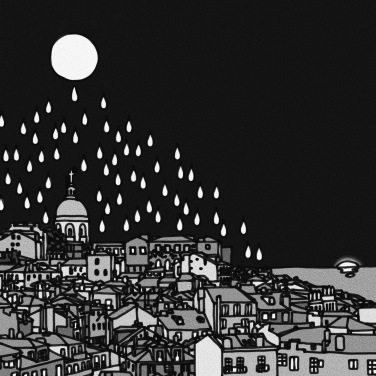 As I peered aimlessly through the delicate fog of Lisboa into the sea of black and white tiles rolling like imperfect waves over Rossio Square, I felt a stream of rain fall on my toes with their crimson-painted nails exposed. I adjusted my umbrella, which I had allowed to list back as my distant memories swam in the square. Sentimentality often strikes me when I am at my weakest, a warm refuge for the cold and lonely spirit. Decades of experience taught me there is only one cure when I fall into the trap of musing, and fortunately for me I was standing just near that very medicine. My feet carried me swiftly and surely to the tiny counter of A Ginjinha, an establishment smaller than my closet and as old as the vines in Porto.

My visits were regular, perhaps even daily. Though my days often appear similar, I never intend for them to be. I follow my heart, and my heart often longs for familiar comforts. My years of patronage are too numerous to count, and in so doing my true age would be revealed. Suffice it to say the trips were many over a long period. To Emilio, working with the kind of graceful movements that masked his mechanical efficiency, I simply smiled and raised a finger to indicate one drink would do.

Emilio nodded as he placed a small, white plastic cup before me and tilted a large glass container, pulling out the wooden knob and allowing a few of the morello cherries to jump out before putting the stopper back in just far enough to hold back the fruit and allow the sweet, dark-red Ginja liqueur to fill the vessel. I placed the Euro coin on the countertop, but he didn’t take it, raising his eyebrows as if to say, “I know you’ll want for another.” Of course he was right, but for my own sake I left the coin there just the same as I took little sips of the delicious elixir, the tartness of the cherries bound by alcohol to the sweet syrup. When it was gone I tossed the two fruits in my mouth, manipulating them with my tongue to extract the pits and holding them off to the side as I enjoyed the soaked bits of bliss. Then in the classic Portuguese way, I took great pleasure in spitting the seeds on the mosaic square, adding them to the scattered collection from unknown mouths.

For a moment I considered walking on, but the dry, sour pull at the back of my tongue beckoned for another, and I obliged. Emilio had already prepared my next drink, and I placed another Euro on the table. My second offering he promptly stacked on the first and handed back, patting his chest to signal the charges were to be added to the house’s tab.

“Obrigada,” I said with great sincerity.

“Boa noite, Carlota,” he said as I carried on past the theater with its Ionic columns, slick steps shimmering under a thin film of moisture. It is an image, along with the city’s winding streets and pastel hued buildings, carved resolutely in the marble slate of my mind. The backs of my hands are strangers to me when compared to Lisboa. It is a city that weeps its glorious history from every crack and seam, its spirit stiffened by an endless chain of hard times but still breathing an inextinguishable flame of life from within. I am only a dot in its present, a passing thought in its timeline, but still present in an intimate and indelible way.

Night was soon to fall upon the city, but the fog would let the light of day linger on longer, dimming imperceptibly to darkness, replaced by the artificial luminescence of lamps and storefronts. I continued to weave my way through the city, up the steep inclines that led only to steeper inclines, and whether the Tejo was at my back or facing me I seemed to be climbing up. This is the Escher-like reality in which alfacinhas are inextricably tangled, a metaphor for the uphill battle of Portugal itself. As I wandered I could smell the intoxicating aroma of salty bacalhau and the foamy head of beer. Conversations skipped off the plaster walls of buildings that ran together like a long, winding train, the road cutting them at harsh angles.

I reached my destination, more a time than a place, and I peered out over the city below. The myriad colors that decorated the structures by day had turned to black, and the scattered flickers sprinkled bright dots like Christmas lights hanging above the water. I heard the bell of the tram as it rounded the bend, its sign floating above the solitary headlight, and I raised my hand so it came to a halt at my feet. I closed and clasped my umbrella before climbing aboard and paying for the privilege, the coins earlier refused, accepted now. I found a solitary seat in the back corner at a window from where my insatiable appetite for the environment could be satisfied.

The tram worked its way along the tracks, smooth in the straightaways and choppy through the curves. When I was full I pulled the cord and hopped off, back out into hidden alleyways. Before I could unfurl my umbrella the rain subsided to a fine and bearable mist, so I left the protection tightly wound. By then the night was alive as if spiked with espresso, but without the tempering effect of sugar or cream, an unnecessary luxury. Day is only an activity to be endured, serving as the time which comes before the night and which rears its unwelcome brightness when night turns in. At night, life possesses endless possibilities as the worries of the day drift away like a blue-tinted wisp of smoke from a damp cigarette. My heels clapped against the tiles like the clicking of an antique typewriter, driving my imagination to ruminate more poetically as I arrived in front of the small bar nestled between busy restaurants and shops. The blue and white tiled number 85 affixed to the stone doorway receded from the brightness as I stepped inside.

“Olá Carlota! Como vai você?” Franco asked from his seat, teardrop-shaped Portuguese guitar set upon his lap as he carefully tuned each of its dozen strings.

I confirmed without speaking. Around me the crowd bustled. Words and phrases from all angles entered and exited my ears, fortified like fine port with the clinking of glasses and scraping of silverware. The space was full, and though the bar was not much larger than the tram, the pack of people made it seem more expansive. I knew the place well, familiar beyond the unknown faces. I was at home in its routine. Sometimes the greatest comforts are found in normalcy. Once Franco was satisfied with the sounds of his instrument, he looked up to me and nodded. The patrons needed no other signal as a hush fell upon the room, and all eyes turned to me.

“I will be singing one song this evening, one of my favorites: ‘Lágrimas da Noite.’ For those of you who don’t know the piece, it speaks to the fleeting nature of the night and the inevitable transition to the responsibilities of day. ‘Lágrimas da Noite,’ ‘Tears of Night,’ will not just be my only song this evening, it will also be the last I ever perform,” I explained to gasps and the great surprise of Franco, who has been at my side for many nights through many years. I closed my eyes, and Franco recovered to begin plucking, delicately and masterfully, transforming the mood of the room as he played. As I sang I let the song take me away. It transported me to the first time I sang it all those uncountable years before. My younger self danced with my present to the tune of my future as my emotions carried the melody. I felt as if all the raw passion inside me was invited to flow out from within as I swayed, the power of fado. When I arrived at the final line, it emerged slowly, savoring as I did the feeling of each word as they passed over my lips one by one into the hazy air:

(Like tears of the night, I pass unwillingly into day.)

“Dia” hung around a moment longer, undulating like a radio wave as Franco played the remaining notes. Applause filled the room, pouring over into my grateful heart. As I opened my eyes I bowed in appreciation, one final time. Franco gave me a loving embrace, and the next singer, a young girl a sliver of my age rose up to take my place. I stepped back out into the street and opened my umbrella to ward off the drops that fell with the heaviness of my saturated soul. They were tears, tears of the night, raining down through an atmosphere seasoned with enchantment, which would, as I would, pass unwillingly into day. I wandered down the avenue alone, but my story, transforming from present to past instantaneously, entered the ranks of Lisboa’s distinguished history.