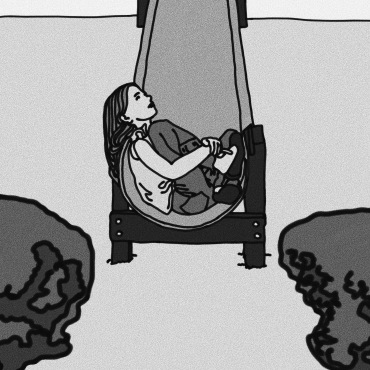 “I don’t know. I think her teachers are fine. Jenny’s just having difficulty engaging with her classmates. It’s hard for her,” Mary said.

“Well Mary, that’s understandable. You know our girls are at that age now where they are starting to figure things out,” Taylor replied, disregarding the suggestion of Jenny’s hardship. “Take Lucy for example. Two weeks ago I was trying to get her to go to sleep and I said, ‘Lucy, it’s time to go to bed. You have to wake up early tomorrow for school.’ And you know what she said? ‘No, I’m going to stay up later. I can just call in sick tomorrow.’ That’s is what I’m dealing with, and she’s only seven,” Taylor said.

“I can sympathize, but I can’t empathize,” added Sally. “Taking care of a seven-year-old boy is like taking care of a pet sometimes, and I’m guessing Andrew will continue to act this age for at least three more years. When he makes noises at the table, sometimes I wish he were making sarcastic comments like Lucy. I just want him to say stuff Will and I can laugh about, but he’s not giving us much to work with.”

“It is good though that we make time for all of them to play together like this,” said Mary.

“Absolutely, how many of them are we supposed to be watching anyway?” Taylor asked jokingly as she head-counted seven kids exploring the community park.

It was a brisk day, but the warm sun permeated the splotchy cloud cover to take the edge off. The jungle gym, with its yellow and green bars, ladders, slides, and unclassifiable structures, shined brightly over the cushy rubber padding beneath, as Jenny, Lucy, Andrew, and four other like-minded children weaved their way in and out of parental surveillance. The three mothers designated to officiate the leisure sat on one of the park’s bench and continued talk of their children and the school, along with comments of spousal annoyance.

“Hide and seek,” Lucy said perched atop the highest platform.

“What about you guys?” Lucy asked the remaining kids. Her question was met with unanimous yeses, and the proceedings commenced.

“Who’s going to be it?” Jeff asked from underneath the slide.

“I’ll be it first,” offered Andrew. “I’ll count to fifty.” Andrew covered his face loosely, allowing some visual information to slip through the cracks in his fingers as he began to count, “One, two…”

“Wait!” Hannah called out from the ground, “Let me just finish tying my shoe!”

“Come on Hannah, hurry up!” Andrew yelled back.

As Andrew restarted, the kids sequestered themselves to the far reaches of the structure and its surrounding obstacles. Lucy ventured the furthest, managing to hide behind the mothers’ bench with the unspoken understanding they would protect her location. Jeff wandered in circles for half of the count with a frantic look on his face as he scanned the area for possible refuge. Finding none to his liking, he settled for a “hide in plain view” strategy, parking himself directly beneath the perforated platform atop which Andrew was standing.

“Fifty!” Andrew exclaimed, rising up and removing his less than exemplary blindfold. His modus operandi was apparent immediately, as he left the confines of the structure and hunted the playground extremities.

Lying at the end of the macaroni-elbow-shaped, plastic slide was Jenny. She stared at the hard shell cradling her body, its imperfections appearing opaque in an otherwise translucent material, as the sun heated her surroundings and made her so comfortable she wished she were never found. With her hands she felt the seam where the pieces were bolted together. It was smooth except for one coarse bump, which she rolled her fingers on over and over again, hoping to wear it down.

“Excuse me,” she heard a woman’s voice whisper from outside her hideout. “Excuse me,” it came through again.

Jenny sat up in the slide and popped her head out to investigate. As she looked around, her head stopped on a dime when she saw, flanked on either side by bushes, a purple monster covered in green stripes that zigged and zagged like recurring M’s and W’s. The monster’s head was green with larger than life features. Its eyes were wide and a soft hazel with a small nose and ear-to-ear smile. The beast didn’t scare Jenny, as she slowly pulled herself out and stood staring at it.

“May I talk to you for a minute?” the monster asked, waving her over.

Jenny didn’t answer, but she approached the strange thing, her head tilting side to side, enchanted with curiosity.

“What’s your name?” Jenny asked, now standing face to stomach with the monster.

The green and purple monster leaned its head down to Jenny’s level and answered, “Mildred. What’s yours?”

“Jenny,” she answered as she reached out to hug Mildred.

“It’s very nice to meet you Jenny and thank you for the hug; that was very kind.”

“Are you a monster?” Jenny asked.

“Then what are you? I’ve never seen anything like you at the zoo.”

“You wouldn’t find any of us there. I’m a nimalfog.”

“A nimalfog? What is that?” she asked, giggling.

“Well what are you?”

Lucy stood with pursed lips and laughed, “I don’t know! A person is just a person.”

“Hm,” Jenny replied, nodding her head approvingly. “How come I haven’t seen you here before? My mom brings me to the park a lot.”

“I’ve never been to this park before. Recently I’ve been moving around, learning about new places, trying new things, and meeting other people like you.”

“School. It’s where they teach us stuff like math and how to read. But reading is hard.”

“I wish I could go to school. I would love to learn new things.”

“I can teach you if you want. I like the learning part, but sometimes my classmates and I don’t get along.”

“Why not? You seem like such a nice person.”

“They don’t understand me. I feel like we speak a different language.”

“That’s why you can communicate with me!”

“What do you mean? I’ve never talked to a nimalfog before. How can I speak it?”

“The language we speak isn’t like English or French. It’s based on something even more amazing, something unique to each and every thing. It’s called imagination, and you have to have a very special imagination to talk to me.”

“So I have a very special imagination?”

“Sometimes I think people are upset with my imagination. Maybe that’s why I don’t get along with everyone.”

“You should never be ashamed of your imagination. It’s what makes you who you are. It lets you see things that other people can’t because their minds are too closed. You have a gift, Jenny!”

“Yes, you do. A rare gift at that,” Mildred replied.

“Found you, Jenny!” Andrew called from behind. Jenny turned around and frowned.

“Jenny! Time to go!” her mother called from the bench.

“Sorry, Mildred,” Jenny said hugging the nimalfog lovingly. “I hope I get to see you again, but now I need to go. It was nice to meet you!”

“It was nice to meet you too, Jenny. Goodbye!” Mildred answered.

“Mary,” Sally said putting her hand on Mary’s shoulder, “Andrew told me he found Jenny hugging and talking to a bush behind the park. He said she was kind of… mumbling.”

“She does seem to communicate more with things around her than with people. The doctor told us to expect that with autism. But you know the doctor said it to us like he was delivering a terrible diagnosis. I like to think that Jenny gets to experience things we don’t. I often wish I could see what’s going on inside her head. I’m sure something amazing is happening in there, something we could never imagine,” Mary said.

The kids clustered around their drivers until all of them were divided between the three cars. Jenny gave her mother a hug and climbed into the way back of the van. She liked the back because it was her own space. As Mary backed up, she looked lovingly at Jenny in the rearview mirror, who was quietly having a joyful conversation. Mary tried to hear what Jenny was saying but she couldn’t quite figure it out. She thought Jenny said something about a “nimalfog?” But Mary decided she probably misheard, after all, there’s no such thing.