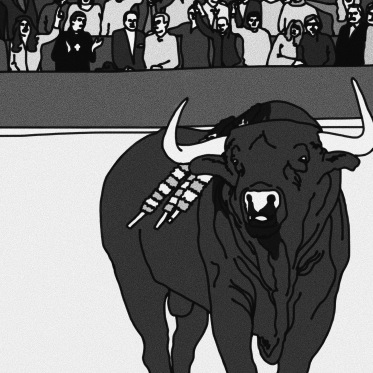 “Miguelito! Miguelito! Miguelito!” The cheers thundered from the highest seats to the lowest with equal fervor. Las Ventas, the cathedral of bullfighting, had a full congregation for its Saturday evening service. No seat was absent a body; even those less enviable in the sun were occupied. The matador, Miguel Rosales, known affectionately as Miguelito across the Spanish landscape, held out his arms, scarlet muleta in hand, basking in the encouragement. Several paces behind him stood the thundering bull in the center of the ring, kicking the dirt beneath its hooves as a match strikes its box. Though its skin was wet with maroon blood, six banderillas of white and blue hooked into its back and flapping as the beast shook, the bull remained decidedly majestic.

Miguelito reached over the burgundy, wood-paneled wall and handed the aluminum sword to his younger brother, Rodrigo. In return, Rodrigo gave his brother the true weapon. Thin, shimmering, and deathly sharp, it was made of tempered steel met with a small handle matching the color of the muleta.

“Godspeed,” Rodrigo said as they made the exchange, his message heard only by Miguelito through the buzz of the crowd. Miguelito smiled back confidently. He removed his hat, with its two distinctive ears, covered in black karakul fur and lined with purple velvet. Miguelito peered in at the postage-stamp image of San Quirico fastened to the side. He brushed his finger across the icon as he looked up. Miguelito stepped to another section of the wall and called out, “Padre Roman!”

A man seated just behind the railing stood up, dressed in black, the white collar of his commitment to the faith standing out like a beacon. He nodded with a big grin to Miguelito, whom he had known as the mischievous child of Beatrice and Francisco in the small municipality of Cambados. Padre Roman had been the priest of the parish in the small Galician town of Vilariño for several decades, and it was by personal invitation of Miguelito that he made the journey to Las Ventas that night.

“Para ti, Padre!” Miguelito yelled as he tossed his hat gently like a glass Frisbee to the priest, who caught it to great applause. Padre Roman motioned a sign of the cross in Miguelito’s direction: a small blessing to help him in the moment of truth. Miguelito bowed and turned to face the bull, its muscles rippling as it took short but powerful steps in place. The horn sounded, indicating the matador had three minutes remaining to emerge victorious from the challenge.

Miguelito stood clothed in his brilliant outfit of lush purple with gold embroidery so extensive it had no clear beginning or end. The beads sewn tightly to the fabric glistened like a suit of stars. His pants, skin tight and of the same lavish constitution, highlighted his flawless physic. Staring down the bulging beast and stifling the unshakable fear of his own demise, Miguelito was Hercules facing the Nemean Lion, sword in his right hand cloaked in the swatch of crimson fabric.

The bull walked with slow, deliberate steps toward him. There was still an impressive vitality in the spirit of the animal that humbled Miguelito but also sharpened his focus on the task at hand. Its came to a stop a few meters from him, hooves scratching at the white chalk line that encircled the ring, as it looked Miguelito up and down with the embers of the crackling fire in its eyes still glowing brightly. It pointed its two black-tipped horns at the man who had led it in a dance with capes, unaware that beneath the cloth hid the object ordained to deliver its fate.

A spiritual silence fell upon the coliseum with a hush like the rustling of a wheat field in a warm, summer breeze. Miguelito inched his way toward the bull until he could feel the warm dampness of its billowing breaths. He slowly drew the sword and matched the tip of the blade with the point on which his eyes were fixed. As he held the sword with the stillness of a surgeon with his scalpel, Miguelito gently waved the muleta at his knees, drawing the bull’s gaze down. Miguelito turned his feet, wrapped in black leather pumps, toward the animal. He shifted his left foot forward, rising to his toes and bending at the knee as he took a deep, calming breath before lunging forward. In the same lighting-fast instant, the bull pounced from its stance toward Miguelito as the blade entered its back between thundering shoulder blades until all that could be seen was the small handle.

Miguelito jumped out of the way, his death-defying act completed as he thrust his hand in celebration. He let his arm fall by his side as the crowd erupted in a deafening ovation.

“Are you going to eat it now?” a woman’s voice blared through the excitement.

“Michael, why don’t you take the knife out of your steak and put your napkin down. I think it is time you stop playing with your food. People are watching you, though I’m sure they were all impressed with your performance.”

Michael reluctantly pulled the knife from his filet and laid the red napkin across his lap, looking around to see the faces at nearby tables staring at him amusedly. He gave a few bows of his head in recognition of their attention before returning his gaze to his wife seated across the table with arms crossed. As his knife cut through the juicy red steak like butter, he looked longingly at the bullfighting photographs lining the walls of the small bodega, nestled down a side street in Madrid, and his time as Miguelito the great matador faded back into the far reaches of his imagination.