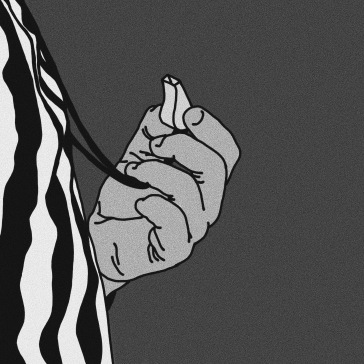 Each step was a beat of an unsynchronized drum, the sound dissociated from the contact of Ray’s feet against the inundated pavement littered with rain-filled seams. Now there was only a sprinkle. His $59.95 analog from Cyber Monday ticked as though the secondhand was working to push time forward.

There was a crash behind, but Ray fought the instinctual urge to jerk his head. Eyes watched from all directions like owls branched in the night. Trying to hide, he tightened the arc of his baseball cap and dipped the bill down to cover his face.

His car, a lusterless silver, seemed to reverse and back away slowly, matching the pace of his gait to remain forever in the distance. Ray wished he were home in bed, away from the atmosphere closing in around him.

“Tst, tst, tst,” their calls were like cicada barks from behind branches and leaves, thoraxes and delicate claws camouflaged by foliage.

“Slow down!” came a voice through the cloud of tongue-to-teeth clicking.

The parking lot was nearly devoid of cars, but a mass of people formed a mob in Ray’s trail, a storm cloud barreling with unquestionable intent. To turn around, to acknowledge the source, was to accept his fate. Ray was not ready to throw in the towel.

“You know what you did!” Ray recognized the kid’s voice. It was woven with tentativeness, as though the words were someone else’s. “Got nothing to say for yourself? Doesn’t matter to you. But this is my life! You ruined my life, man.” In the last statement Ray detected real anguish. “Hey, I’m talking to you! Answer me!”

Ray, his car still backing tauntingly, could not restrain himself any longer. The sprinkle reached more of a trickle in his tracks. His toes in mesh-covered shoes dampened. “It was nothing personal, kid.” Ray said, adding, “kid” to deaden the blow, but it was patronizing. He tilted his head to his shoulder like a parrot inspecting its feathers. “I’m human, just like you.”

“Just like me? You don’t know a damn thing about me, or what I been through! How I got here, how hard I worked. And just like that,” he said with a snap, “you ended it all. So don’t tell me you like me. You no human; you a rat! How much they pay you, rat?”

Ray’s mouth opened to defend his honor, and his guts twisted. He always prayed these moments would never come. So much for prayers, Ray thought with post-middle-aged cynicism.

“Why don’t you turn around and look at me, rat?” Each time the kid said “rat” it stung. Ray had been chewed out before, too many times to count, but this was different. This was a kid.

Ray realized he was never going to make it to his car. When he turned all he saw were the reflections in their eyes, a constellation of paired clusters. Above them all, two north stars in the sea of glaring sparkles, were the kid’s eyes. The singular street lamp lighted Ray like a statue, bugs whizzing in a cloud, feeding off the scarce brightness. “I—“ Ray started to say.

“Boo!” thundered the crowd, “Boo!” Ray could barely hear himself think, let along the whistles through the thick chants of displeasure.

“Ray! Are you sure?” another official asked when they congregated on the sideline.

“Looked like he got his arm on the way up,” Ray replied.

“I gotta be honest, Ray, I didn’t see anything. He was trying to sell it.”

“Yeah, from my angle it was a no-call,” the referees were screaming to make themselves heard from inches away.

“Ray, this could be the championship. If you’re sure, they’re on the line. But you gotta be sure. This place is gonna explode if the other team wins on the foul line.”

Ray considered the merits of his colleague’s comments. “We can’t let them decide this. They want that kid to win because he’s the next Zion. But that’s not how we call games.”

“I know, Ray, but we’re both seeing it as a no-call. You want to swim against that stream? It’s on you.”

Ray closed his eyes. He went deaf to the roar of outcries of “you suck!” and “go to hell!” He imagined he was walking outside, after the game ended and the championship was decided. Each step was a beat of an unsynchronized drum, the sound dissociated from the contact of Ray’s feet against the inundated pavement littered with rain-filled seams. Now there was only a sprinkle. His $59.95 analog from Cyber Monday ticked as though the secondhand was working to push time forward.

“Hey Ray! We need an answer,” one of the officials demanded.

Ray returned to the fold and went to the middle of the court where he summoned a shriek from his whistle. “There is… no foul call on the shot. It was an inadvertent whistle. Time expired on the play. The game is over.” He barely got the words out before the stadium erupted, the court flooded by fans hoisting the star-recruit on their shoulders with the trophy in hand. As Ray walked back to his car that night there was no presence behind him. He answered his own prayer.