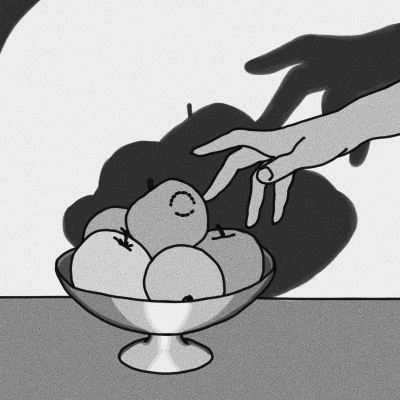 As Marsha stepped into the kitchen it was pitch black, the world outside a shade darker. Only a small, weak light hung in the distance, glowing like an apparition. Marsha flipped the switch and a bright blur greeted her. It was a surprisingly modern kitchen with a bold mixture of black slate countertops and brushed steel appliances. Marsha remembered why she woke up, and the return of hunger was accompanied by the realization she wasn’t in her home. Everything was too neat, the room like something she saw in Architectural Digest, decidedly not her doing. She felt a sharp pain in her head. The events of the previous night were fuzzy. The lack of clarity did not strike Marsha as particularly positive, but until the details bubbled through she decided to withhold judgment.

Marsha opened the refrigerator and was more surprised than disappointed to find it completely empty. With frustration, she closed the door, which clicked as it sucked tight to ensure the emptiness maintained a cool temperature. Marsha moved on to the matte, charcoal cabinets. The kitchen quickly developed an unwelcome reputation as a barren wasteland. In a frenzy, Marsha frantically opened all the cabinets and drawers to find each carefully stocked with empty space.

She slapped her hands on the island and let out an exasperated breath. In a change of pace, Marsha noticed how beautifully her nails were manicured, each coated in a deep maroon and shaped with mechanical perfection. As her eyes worked their way up, she saw on each wrist a thin, black bracelet. She was wearing a dress, a nice piece with large green and white stripes, cut mid-thigh and devoid of wrinkles. Marsha saw her reflection in the floor-to-ceiling windows facing out from the kitchen and concluded that no one had ever looked better the morning after a hazy night. Having begun to view her situation with a better perspective, Marsha revisited her mission to discover food. Scanning the room for anything with that elusive edible quality, her eyes stumbled upon a bowl of bright Granny Smith apples on the opposite end of the island.

With considerably less elegance than her appearance would suggest, Marsha lunged at the bowl and plucked one of the green orbs from the steel container. Like a thirsty desert wanderer handed water for the first time in days, she held the apple near her mouth but couldn’t quite bring herself to take a bite. Recognizing the humor in her restraint, Marsha proceeded to sink her teeth into the fruit, closing her eyes so she could focus on the sweet taste of its juice. Instead she recoiled as her tastebuds were denied what they so strongly desired. She was grasping an apple severely lacking in that most desirable quality of her search: edibility. Pulling the hard sphere from her mouth, Marsha noticed the wood grains circling the object.

All Marsha could do was shake her head, feeling lucky her teeth had not jumped ship. She reached out to place the apple back in its position as object d’art, but her arm froze. Marsha was overwhelmed with a feeling of paralysis. Outside the kitchen, rows of lights lining the sky turned on in succession. A man was walking down the street, headed right in her direction. Standing there as if locked in place, Marsha watched the man move closer and closer. As he neared the windows, Marsha squinted. Her heart stopped, and she felt as though she’d turned to stone, everything about her world falling back into place. Her mind went blank when she saw the patch on the man’s shirt: Powell’s Home Department. And there she stood inanimate, another mannequin in one of the countless displays.

One thought on “Hard Diet”