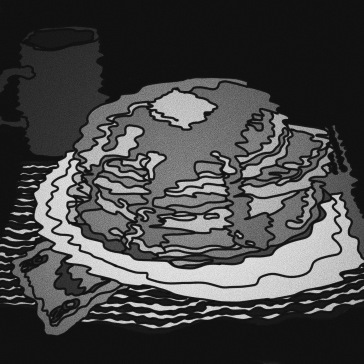 The ache in every joint, the slow response of limbs to their calls for action, a stiffness generally reserved for raw materials, all delivered to Norman Warren an unequivocal message: he needed the day off. On a business trip, he woke up in a generously sized hotel room much larger than the space he required. It was on the company’s dime, so he didn’t feel it was money wasted, at least not his money. As for comfort, the expense proved unnecessary, for comfort was as hard to find amongst the “well-designed” furniture as Norman’s glasses, hidden somewhere in the recesses.

He was a lead guitarist on a drug-fueled fit while he tore the room apart. Then it donned on him. Like watching a brief headline span across the television screen, it was announced that Norman had locked his glasses in the safe. It was a foolish decision, that much was evident. He needed his glasses to get his glasses. In his state, the irony was too irresistible to not grant hearty laugh.

With a few clicks the combination safe opened, the same code as always. Norman never gave it any thought, but if he were ever asked how that year became chiseled so deeply on the tablet in his mind, he would reply with a shrug. There were many things he struggled to explain, but fortunately for his sanity, he was never one to get hung up.

Having retrieved his glasses, their horn-rimmed frames set squarely on the bridge of his nose, allowing access to a clearer picture of the world, Norman set about fixing the wreckage he’d caused. He was a details man, some would say eccentric in his deliberate nature. He dressed, smartly as was his habit. Rarely seen without a suit, well tailored, tapered, and lint-free, colleagues and friends frequently remarked on Norman Warren’s well kept style, before even commenting on his character or disposition.

Even on a day of rest from his profession, sartorial resplendence did not suffer. It had been some years since he was last in Chicago, colder times in younger days, but he scanned through his list of remembrances, probing for favorite activities to relive.

The rest was all-encompassing, any thought of business wholly and truly forgotten. If a passerby asked at that juncture to list the primary responsibilities of his office, he could hardly have produced a one. But Norman’s memory was not without water. He remembered a diner he used to frequent downtown, and the smell of its pancakes resurfaced in the cabinet de curiosité with the aromatic fortitude of a fresh stack beneath his nose.

Along the sidewalk the brisk winds whipped around impressive feats of architecture. There was a supreme contentment in the air like a private weather system. Norman danced along the cracks, a checkerboard of light under the guidance of a harshly angled morning sun. Little attention was paid to the many faces gazing upon him. And while it did not trouble him in the least, he noticed a few men in dark attire seeming to follow. Those characters he dismissed as figments of his elaborate imagination.

“A stack of plain pancakes, please,” Norman declared to the waitress who’d shown him to a vinyl booth, adding, “with just a dollop of butter on the top, and a container filled generously with maple syrup.”

She nodded with a smile, clamping the menu under her arm as she made notations in a dilapidated notebook.

“Any bacon or sausage?”

“No, no. I wouldn’t dream of it. Nothing to alter the experience of these wonderful pancakes! Things haven’t much changed since I was here last. Not too many places can say that. I’m not as young as I once was, of course. Sure the chef’s different now. Joe I think his name was. He was old when I was young. Now that I’m old, I suppose there’s another Joe,” Norman replied with an enthusiasm rarely in such abundance at that hour in that place.

“Indeed. If my sometimes faulty memory serves me, the coffee here is likewise worthy of unaltered consumption.”

Her confusion was legible. “Black, got it,” she answered with a laugh, sifted out the important elements of the superfluous reply.

Norman folded his arms and looked around the diner with great satisfaction. It was just as it had been those many years before, when responsibilities were minimal and attitudes could only be described as carefree. Norman was blissfully unaware of any changes undertaken since his last visit. Even the table possessed the same sticky spots identified decades before, elementary to its function. He glanced at the face of his watch out of reflex, but restrained his attention. It was not a day to worry about passing minutes or hours, and decidedly not one on which to be concerned with ticking seconds.

His pancakes arrived with the full-fledged scent he’d earlier recalled so vibrantly, though now they were real. Using careful swipes of the knife, Norman spread the butter. Precisely he laced a pattern of syrup that soaked into the pores of the hot, fresh stack. The pillowy texture and sweet, salty taste delivered to him the exact pleasure he desired since waking up. Bites he paired with sips of coffee, replenished at irregular intervals by floating hands in his periphery. Nothing distracted from the enjoyment of the monumental breakfast.

As Norman neared the end of the meal, a refill of his coffee came with the handwritten bill, a scribbled amount in faded pencil on a carbon copy. He reached into his wallet and pulled out the last remaining bill, heavy enough to cover the expense plus a generous difference to those who’d taken care of him. “I need to go to the bank,” he thought aloud. He tore open a wet wipe from the dispenser and sanded away the sticky residue from his fingers. Then he dusted off crumbs from his peaked lapels.

A few of the men from before were sitting at the window table, trying to be invisible. The other patrons, those not dressed in black, watched him too as though they expected a performance on his way out.

“Hey Norman!” a kid called out from nowhere. “Can I take a picture with you?”

Not wanting to appear as though he didn’t understand the intricacies of the generation, Norman obliged with a smile and a twinkle of an eye. How strange, he thought, what will these teenagers come up with next?

Norman noticed a branch of his bank two blocks down the street. His phone had a seizure in his breast pocket. It was the kind of arrhythmic nonsense that indicated a return to service after a period absent a signal. Best to be ignored, something for later, Norman supposed.

Norman was more than a little caught off guard at the warm welcome. The manager’s face was unfamiliar.

“It is a good morning,” Norman replied.

He approached the teller, who smiled with her bright white teeth in full display. For a moment he debated whether or not to complement on the perfect arrangement of her ivories, but thought the better of it. “You have a beautiful smile,” he went with instead, judging it a more acceptable compliment.

“Thank you, Mr. Warren,” she replied. “What can we do for you this morning?”

“I’d like to make a withdrawal. Here is my card and my identification.”

The teller picked up his debit card but slid the ID back. “That won’t be necessary. I only need this.”

So much for security measures, Norman thought.

“And how much would you like to take out this morning, Mr. Warren?”

“Wonderful. And I’m guessing you’d like that in twenties?” she answered with a chuckle.

“That would be… fine. It doesn’t matter to me particularly.”

“I just thought you might prefer twenties, because, well, you know.”

“Here you are Mr. Warren,” the teller responded as if she hadn’t heard the comment, as though he’d said internally.

Norman retrieved the stack of bills. “Thank y—“ he started to say, but his attention was arrested. He examined the money, given to him in an exclusive denomination. Cold swelled like a frozen wave on the shores of a Scandinavian island. The gaiety of his earlier manner shattered into jagged shards. Staring back at him on each of the crisp bills, a green and black slide in two dimensions, was the unmistakable visage of Norman Warren.