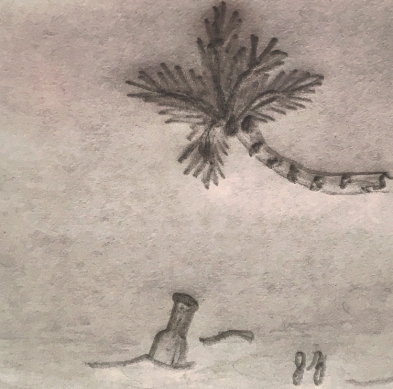 Alicia stood at the water’s edge, the occasional tail of a broken wave sending cool water between her toes. She held a small round shell in her hand, rubbing the sand off with her thumb and forefinger as she looked out on the layered atmosphere. The only visitor as far as her eyes could see was a seagull gliding on the ocean breeze like a distant kite. Once Alicia no longer felt the coarse grains, and her fingers slid along the ridges of the shell without interruption, she tossed and caught it a few times, keeping her focus on a buoy jostling with the current far away. She waited for the white of the next wave to form, and then skipped the shell across the surface towards her marker. It kicked up in the air when it made contact with the crest before falling behind with a plop. Satisfied, Alicia wiggled her toes and tensed at the slight pricks from bits of crushed shells.

She ran her hands along her smooth thighs while the wind picked up and filled her linen shirt like a sheet drying on the line. When Alicia turned her head a mess of her hazelnut hair cut across her face. She quickly flicked it back and out of the way. With a full breath of the salty-sweet sea air, she turned and walked along the shoreline, a thick forest of palm trees to her right, the clear water folding to her left, and nothing but pristine white ahead. She had the island cove all to herself and was attempting to use the opportunity to think of ideas for her next play, walking without urgency. Tucked into her front pocket was a pen and small moleskin notebook where she recorded the intermittent flashes of lightning in her brainstorm.

Alicia noticed something glistening in the sand and shifted her course a few degrees to investigate. When she arrived at her destination, she found the neck of a green beer bottle. She could tell it had been there for a time because it had transfigured to sea glass, the strong sheen weathered away by passing sand and the ebb and flow of the tides. Alicia bent over and pulled at the lip, expecting it only to be a broken piece, but was surprised to find a fully intact vessel. Alicia dumped out what had accumulated inside. She smiled as an idea crossed her mind. Perhaps she was just the hopeless romantic everyone seemed to think: the idea of putting a message in the bottle was too tempting to avoid.

Alicia sat down on the warm, shifting ground, which hugged her legs welcomingly, and pulled out her notebook, its leather a little damp from sea spray. Looking to the cotton ball clouds in the sky for inspiration, Alicia thought of what to write. She clicked her pen and introduced it to the tip of her tongue as she opened to a fresh page.

“Dear Wanderer,” she started. “I’m writing this message from a different time and a different place. I don’t know you, but if you’re reading this I feel you must be a romantic like me. Take a minute to look around you and appreciate what you have, for each moment is as fleeting as the wind, and like each breeze, it is precious. Yours in time, Alicia, March 1st 2015.”

As she finished signing her name, Alicia took care to separate the page from the journal. She rolled the paper and sent it into the mouth of the bottle as she stood up, brushing off the sand that clung to her skin. She looked around for something to cap the container with, noticing the spent cork of enjoyed Bordeaux within reach. With a few taps from the base of her palm, Alicia secured the stopper, preserving the capsule until it reached its unknown person and time. She made her way back to the edge and waded out until the salt water seeped into the white fabric of her button-down. She gave a last look to the hazy green glass, her note tucked safely within, and then threw it as far as she could, beyond the push of the current, with the maritime postal service stamping the parcel with a splash.

Alicia watched the neck of the bottle bobbing away for a few minutes before losing it behind some ripples and then continued her aimless trek along the beach. Her mind wandered through a labyrinth of themes, time periods, and storylines. She caught a glimpse of high tea in Elizabethan England, bombshells exploding on the shores of Normandy, and young lovers sharing a laugh at a tapas bar in turn-of-the-century Madrid. Her stream of consciousness ran at its own pace, speeding and slowing at irregular intervals. For a time she got so lost in her imagination, she no longer saw the beach in front of her or the ocean and palm trees to either side. It was as if she was watching a montage of what her play could be but without the guidance of what it should be. Alicia scribbled bits and pieces of her thoughts, a scrambled alphabet soup in a code only she could decipher. But nothing original seemed to materialize.

The whirlwind came to an end, as it always did, and thrust her back to the present. A few more seagulls joined her and were warming their pipes like a barbershop quartet with laryngitis. Ahead of her a bent palm tree reached out like an arm from the dense foliage, its fronds swaying with the whistling wind. The scene was restorative after the hurricane in her mind ran its course. Further down the beach where the shore bent outwardly, there was a man tending to a small boat, propped up atop a few logs. As she got closer she watched him push it to the water and over the break of the waves. He hopped aboard, propelling the boat forward with powerful strokes of an oar.

A stronger swell took Alicia off guard as it crashed up against her legs and sprayed her up to her waist. As the water receded, the color from the sand drained slowly after. A crab scampered across the whitening surface and stopped a few feet from Alicia. She could see its eyes, fixed at the end of small antennae, looking her over as its claws opened and closed, snapping like Spanish castanets. Assessing Alicia to be a threat, the crab sidestepped its way back onto dry ground and gave her one last look before diving into its hole.

When Alicia’s gaze returned to the shoreline, she saw a green bottle wash up in front of her. She recognized instantly that it was the bottle she had thrown in earlier. Seeing it again so soon made her laugh. With a sigh she picked it up from the wet ground, some of the thick sea foam still clinging to the bottom. Slightly resigned from her failed attempt, with a shake of her head she pulled the cork out using greater effort than expected. She flipped the bottle and knocked out the curled paper. As she unrolled it, she looked at her watch: noon. Looking back to the message, a strange feeling came over her and she flashed back at the timepiece. Alicia realized she had lost track of time, noon coming as not much of a surprise, but a different marker of time’s passage was indeed very strange. Upon closer inspection she confirmed what her quick glance had revealed: March 1st, 2065.

Alicia’s eyes, wide with alarm, moved from the face of the watch to her hands, littered with the lines defining a long life. Her hair was no longer the familiar nutty color, but was instead a soft white like the earth surrounding her. Alicia looked down at her legs, their formerly toned shape more relaxed, with a few straggling streaks of blue veins. In disbelief she dropped the bottle. Then with shaking hands, she opened the letter and saw the words, the handwriting faded and warped from condensation over decades: “Dear Wanderer, I’m writing this message from a different time and a different place. I don’t know you, but if you’re reading this I feel you must be a romantic like me. Take a minute to look around you and appreciate what you have, for each moment is as fleeting as the wind, and like each breeze, it is precious. Yours in time, Alicia, March 1st 2015.”

Suddenly a flood of scenes came crashing through her head like a tidal wave, missed and forgotten moments from the past fifty years of her life, remembered in an instant. Every clip flew by, unfamiliar, as if she were remembering some other person’s life. The words of the message churned over and over unrelentingly in her head as if it were trying to become butter, as she stood breathless, the water washing over her feet: “each moment is as fleeting as the wind.” Suddenly such a wind picked up, shaking the palm trees, and forming small ridges across the surface of the water as her hair blew into her face again. When she cleared the tangle strewn across her eyes, the message was torn from her hand and thrown into the sea. Alicia watched as the paper floated on the surface before it soaked up the salt water and disappeared from view. For a while she stood, staring out across the water, wondering how she’d let decades of precious moments slip away like unappreciated breezes, her own message unheeded. Alicia looked back at her watch, 12:05, March 1st 2015. Frantically she gave herself a look-over to find everything as it was before: young and colorful. She pulled out her notebook and wrote with haste the outline for her next play.