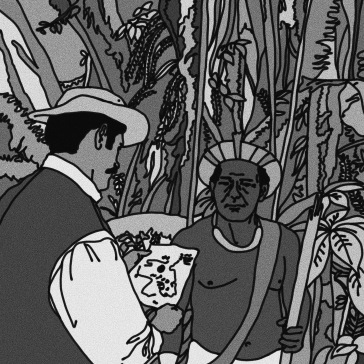 “If you go through, you will never return.”

The wind doesn’t blow at the lowest reaches of the vines in the rainforest. Though skirting across the canopy like a running fire, only whiffs make it to the floor, mere whispers of ghastly souls waft near that ground dense with the detritus of millennia. Animals howl in stereo, chitting and chatting, snickering and screeching. Deeper and deeper we cut ourselves through the Amazonian madness. She closed the doors behind, growing back ten-fold stronger. We could hardly place breadcrumbs before they were masticated and spit out, blurring our trail into the abyss.

We were given a seemingly simple task, the kind that when written down are straightforward and achievable: map this portion of the rainforest. Our directive came from the high ups in the House of Commons, but I presume it was inspired by the intellectual curiosity of the House of Lords. Nary a commoner cares for the hot, humid, Brazilian landscape.

Three of our crew, a small outfit from the start, succumbed to various diseases. Horrible in their symptoms, we were glad in the end to see them close their eyes, for in so doing they were released from the grip of terror. Only two remain, my guide and myself. João, a Brazilian by birth, is an Englander at heart. His English is better than many Englishmen I came across at university, and his understanding of these wicked weeds is unrivaled.

There was rumor of a small tribe living in the area we intended to survey. João had a hidden sense about those sorts of things. He was convinced we would be confronted upon arrival.

“The people who live there, in these places. They don’t want to be found. They are constantly running, escaping from the world closing in around them.”

“Will they be hostile?”

“We are going into their home without invitation.”

I saw his point clearly. Heat in the Amazon is not similar to that felt in the summer streets of cramped London. It eats you out from the inside, makes you smell as though you are slowly decomposing. There is no reprieve. Only minimal light filters down, sparkling like diamonds. I often look up and dream of climbing to the top of one of the fantastic trees and looking out over the landscape. Seeing the sun again and a sky of blue or gray, any color as long as it was devoid of vegetation.

Rumors it seems are sometimes true, because we did eventually reach our destination and were greeted with startling immediacy by an unusual tribe of people. Their hair was cut like wigs, the same adorning each, paint decorating their exposed bodies with dark colors and unfamiliar shapes. We were not so much welcomed to join them at their dwellings as we were compelled by the sharp protrusions on their staffs.

Fortunately for us, João was proficient enough in their hand signals to communicate our intent and diffuse tensions. When he described to them our desire to draw the topography and survey the black spot on our map the tribesmen looked at on another disapprovingly.

“Tell them it is imperative,” I said. “And let them know we will make no mention of them in our report. If privacy is their concern.”

It was difficult to read the leader of the tribe, a man whose status was derived from a heavy knobbed walking stick and the rather large pedestal on which he sat. He was the sole member in possession of a headdress. As a subject of Her Majesty, I am well versed in the significance of replacing one’s bowler with a ceremonial piece. As we waited for a decision, I wondered if we would make it out alive. It would be well within their rights to chop us to bits there on the spot. Aside from the discomfort of such an affair, I sympathized without objection.

“He will show us,” João said. “But there is something… something terrible? There is darkness there. He warns us not to go.”

“Please tell him we accept his offer. And we will be vigilant.” I tried my best to keep composure. The warning shook João. It was my responsibility to keep our heads on the level. With moss-stained hands I pulled my knife from my pocket, khaki long ago turned soot black. I offered it to the leader who nodded for his companion to accept.

“They will take us,” João said.

“Thank you,” I replied, unsure of how best to show my respect. I bowed, and conveyed the desired effect. The leader gave us a very stern look indeed when we departed. His eyes dug through to my innermost being, connecting with me spiritually. I could hear him saying, “goodbye, forever.”

João and I took measurements as we passed across the barrier of the thick rubber trees and spider webs the size of quilts, dotted with scurrying beasts and trapped insects like fists. Aside from the tribe, we were the first to see that place, to feel the bark, taste the grit of the moist air. I looked up from my notebook to see our guide pointing at the largest tree I’d ever encountered. Measuring no less than ten meters in diameter, it resembled more closely the base of a cliff than a forest resident.

The short man, much older than João and I combined, motioned for us to accompany him to the other side of the enormous trunk. As we did the birds ceased calling. I no longer heard the crunch of critters beneath my muddied boots. Not even that whispering air, which crept through vines, followed us. A smell, pungent like death under a cloud of incense welcomed us on the other side.

What I saw there cannot be accurately expressed in words. No picture would capture the scene to the full extent. Rippling like the waters of an otherwise still pond, a blackness large as a postal box. Swirling slowly in its far reaches were the twinkling stars of clear nights, nights away from the smog of London, out in the country where the world breaths freely.

João recovered his faculties sufficiently. Our man was deliberate in his gestures, repeating the same sequence over with precise movements.

“If you go through, you will never return.”

I took out my notebook, the one in which these notes are scribed, and wrote these final lines. I told João to remain. The duty was mine not his, for Queen and country. Beyond those responsibilities I had curiosity to satisfy. After all, an adventurer at heart I have always been and will always be. I am now to step into the brilliantly swirling unknown, wandering, like Carroll’s Alice, into the beauty of other worlds.

One thought on “In the Tree Lies Beyond”